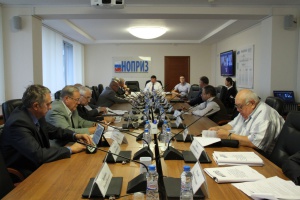 On 4 September 2015, a regular session of the Committee for Design of Industrial Facilities and Transport Infrastructure was held in the National Association of Surveyors and Designers (NOPRIZ).

The committee discussed the 4th draft of the Federal Law “On amendments to the Town Planning Code of Russia” to be supplemented with provisions on urban development factors and process design. The document was adopted with comments that were submitted to the Ministry of Construction, Housing and Utilities of the Russian Federation.  The committee also discussed the progress in preparation and expert review of the draft Federal Law “On engineering activities in the Russian Federation” and the list of regulations to be further developed and updated for the Ministry of Construction, Housing and Utilities.
It was agreed to prepare an action plan 2016 – 2017 for elaboration of regulations and to select on a competitive basis the organisations that will be assigned with the task.
Victor Popov, Member of the Committee and the Chief Project Manager of Stroyproekt Moscow Branch took part in the Committee session.