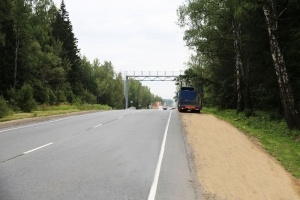 A symbolic cornerstone and a capsule were laid on the bank of the Oka River in Annenki District of Kaluga to commemorate an official launching of the project for construction of a four-lane motorway with a bridge across the Oka River, four traffic intersections, three grade-separated interchanges, and eight overpasses. This ambitious project is planned to be realised within 2 years.  The total budget of the project is about RUR 10.5 billion.

Currently the city is facing severe transport problems due to a low traffic capacity of the existing bridge over the Oka River. The bridge cannot handle the increased traffic flow coming from the rapidly developing right-bank area of the city. Construction of the South Bypass will solve the transportation problems both within the city of Kaluga being a regional centre and those caused by transit traffic. The South Bypass will redirect 80% of the traffic to outside of the city diverting an over 7.1 million ton freight flow to the bypass route.