The international exhibition and forum “Russian Roads of 21 century” were held in Irkutsk. Stroyproekt as a strategic partner of the Russian road construction companies regularly participates in such events 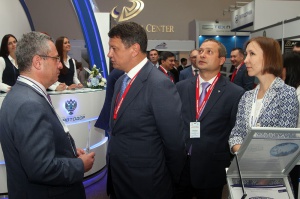 Stroyproekt presented its major innovation projects which are important for our country, including those implemented under a PPP mechanism. Those projects include a unique project for construction of the Western High Speed Diameter in St. Petersburg, an express toll road Moscow – St. Petersburg, rehabilitation of the M-4 Don the M-1 Belarus highways, Khabarovsk Bypass Road and others.

High officials who attended the forum, namely Head of the Federal Highway Agency Roman Starovoit, Governor of Irkutsk Region Sergey Yeroschenko, Deputy of the State Duma Chairman for Transport Sergey Ten and Deputy of the Presidential Representative in Siberian Federal District Andrey Filichev, appreciated the projects of Stroyproekt presented on its stand and praised the quality of works implemented by Stroyproekt being a leading design company for major national projects.

General Director of Stroyproekt Alexey Zhurbin made a presentation at the conference “Development of Russian Transport System – Roads of Siberia”, which was held within the framework of the forum. A. Zhurbin reported that Stroyproekt continued working on Novosibirsk projects and completed the design for construction of the fourth (toll) bridge over the Ob River. In addition to designing, Stroyproekt has also rendered the services that are new activity for the company – the services of a legal and financial consultant for development of a concession model and a concession agreement and for preparation of investment competition. The investment competition is scheduled for December 2015.

In his report, A. Zhurbin noted that construction of crossings over the largest Siberian rivers is extremely important for Siberia and the Far East. Road construction in those regions requires novel technologies and state-of-the-art engineering structures. Stroyproekt has been designing similar projects for 25 years and its engineers are capable to realise the most sophisticated designs. The Bugrinsky Bridge Project is one of the examples of high-level expertise of Stroyproekt’s engineers. The bridge was opened to traffic by President Putin in October 2014. In 2015 the project was nominated for the State Prize of Russia.

Alexey Zhurbin also spoke about various completed projects. Stroyproekt was involved in large-scale projects such as construction of Russky Island Bridge in Vladivostok, development of road transport infrastructure for Sochi Olympics 2014, rehabilitation of historic Dvortsovy Bridge over the River Neva in St. Petersburg and others.