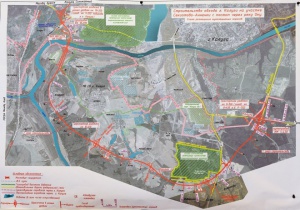 Stroyproekt has won an open tender for development of the detailed design for the southern by-pass of the Kaluga city at Sekiotovo - Annenki section.

The 21 km - long highway will run through the city and region territory. The design speed is 120 kmh. The four-lane motor road will include eight overpasses, four traffic interchanges and a non-standard bridge over the Oka River.

The new road will allow diverting heavy vehicles to bypass residential areas and will reduce the traffic in the city historical centre.

Seven companies participated in the tender. Congratulations to everyone in Stroyproekt Engineering Group with this important victory!