Stroyproekt participates in the 4th International Forum “Transport of Siberia” 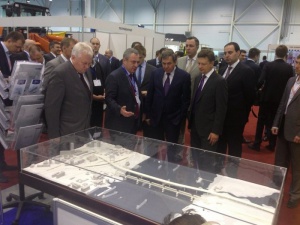 The round table on “PPP mechanisms in Road Sector” was arranged within the 4th International Forum “Transport of Siberia”.  The Russian Minister of Transport Maxim Sokolov took part in the event.  The General Director of Stroyproekt Alexey Zhurbin gave a presentation “On implementation of the new Ob River crossing project in Novosibirsk based on PPP mechanism”.  Mr. Zhurbin said that Stroyproekt developed the design documentation for the project but also, in the new capacity, rendered legal and financial consultancy services in defining a concession model and in preparing a concession agreement and tender documentation. The project financial model was designed based on the most realistic development scenario of road and street network of Novosibirsk in 2019 – 2035.

‘Implementing this project based on PPP principles was especially important in the context of the budget expenditures optimisation. PPP is a mechanism for a long-term and mutually beneficial cooperation between the public and private sectors that allows not only attracting private investment but also improving the quality of services provided to customers’, commented Minister Sokolov.

Within the Forum, the TRANSIBERIA Exhibition was held where Stroyproekt had an individual booth displaying its major innovation projects realised through PPP mechanisms, in particular Central Bridge Project in Novosibirsk,  Western High Speed Diameter in St. Petersburg,  Express Toll Road Moscow – St. Petersburg, the M-4 Don Highway Rehabilitation Projects and others. Stroyproekt’s exhibition was attended by the Authorised   Representative of the Russian President in Siberian Federal Region N. Rogozhkin, the Governor of Novosibirsk Region V. Gorodetsky, the Mayor of Novosibirsk A. Lokot and other senior officials.