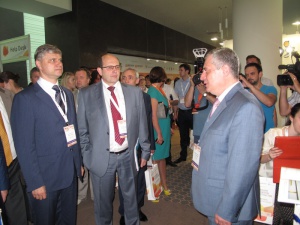 The forum was attended by the First Deputy Minister of Transport of Russia Oleg Belozyorov, the Head of Rosavtodor Roman Starovoit and his Deputy Igor Astakhov, the Chairman of the Board of the State Company Russian Highways Sergey Kelbakh and the General Director of Avtodor Engineering Nikolay Bystrov. The General Director of Stroyproekt Alexey Zhurbin also took part in the forum.

The forum brought together over 300 participants including representatives of state authorities, top managers of the largest engineering and construction companies, as well as manufactures of state-of-the-art equipment and materials for road industry.  The delegations of Belarus, Tatarstan, Spain and Belgium attended the event.

Inclusion of innovations into designs. Problems and solutions
Over the last 5-7 years the road industry has paid much more attention to innovations. In 2007, Rosdornii developed methodological recommendations for the promotion of innovations in design, construction and rehabilitation projects implemented by the Federal Road Agency (Rosavtodor). In 2011, Rosavtodor adopted the Innovation Strategy 2015 which is the basis of activities carried out by its Scientific Research Department.   Databases developed as part of various road scientific studies and research and development studies have become available. The scope of these databases has significantly extended which proves that there is much potential for the industry development. In March this year, Rosavtodor signed an order specifying the organisational structure of the Scientific Technical Council, its responsibilities and powers. Road science has been constantly developing. A major contribution to the promotion of innovations has been made by the State Company Russian Highways (Avtodor) which has been playing a pioneering role in implementation of novel approaches, like BIM technologies and engineering.
Stroyproekt Engineering Group is actively involved in the development and implementation of innovations. Our most known activities in this field are the design of the M-4 Don highway section using Russian and European standards, the feasibility study for development of three road testing centres, a testing unit for determining asphalt wear resistance to winter studded tyres, development of proposals on using the FIDIC rules and procedures for road contracts, etc.
However, there are problems that particularly manifest themselves during the practical implementation of innovations. When designing Western High Speed Diameter in St. Petersburg and Bugrinsky Bridge in Novosibirsk and when working on the rehabilitation projects for the M-8 Kholmogory and the M-4 Don highways, and other projects, we have had to face systematic objections from the state expert review authority (the State Expertise) that does not approve innovative solutions for various reasons.
Being an engineering support service established for checking designs for safety and technical compliance with standards and norms, the State Expertise has become more inclined to perform control and supervision functions, which do not match its essential tasks.
The Ministry of Transport and Rosavtodor together with their agencies and road administrations represent a full organisational structure of the client/developer which should make use of its legal status to be more independent in the decision making.
The Ministry of Construction and the Ministry of Transport shall improve their mutual support and partnership intended to promote advanced technologies; the current practice of suppressing innovations due to their insufficient approbation in Russia shall be ceased in case their efficiency has been proved by experience of the neighboring countries.
Considering the common practice of state support for innovations accepted in most countries (for example, Germany or other EU countries), a similar approach shall be adopted in Russia as well.
In view of the Russian Federation President’s order summarizing the results of the State Council in October 2014, the State Expertise shall be based on a rational legal framework that should correspond to the tasks the State Expertise has to carry out. It makes sense to re-establish internal expert review bodies within the Ministry of Transport since there are examples of such internal construction expertise in other industries.
Creating the institution of modified design solutions that can be accepted without any repeated examination was the first example of reducing bureaucratic red-tape procedures in construction. A dialogue about the possibility to introduce innovative solutions initiated by the client/developer or the technical employer during the construction process could be the next step forth.
Since the issues related to the revision of design solutions in the course of construction are not properly detailed and specified in our legislation, it is proposed to use international practice of regulation in this sphere, particularly the FIDIC Contracts procedures. The Ministry of Transport and the State Company Russian Highways should be more actively involved in developing model contracts under the Ministry of Construction, using also the FIDIC pro-forma contracts.
All the proposed measures could be a basis for the mechanism that would enable the great innovative potential gained by the Ministry of Transport and the Federal Road Agency to be implemented in practical technical solutions. This could be done based on the legislation which would encourage rather than suppress innovations, thus reducing expenses and raising the credibility of road engineers in our country and abroad.