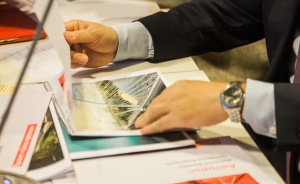 Stroyproekt, as a co-organizer of Sika Awards 2015 Innovative Architecture Contest “Bridges of the Future”, announced the name of the winner in the special nomination “Aesthetics of Reliability” established within the framework of the Company’s 25th anniversary celebration.

The project of the student team (Ilias Kulbarisov and Maria Egorova) from Ufa State Petroleum Technological University became the prizewinner.  The team of Samara State University of Architecture and Civil Engineering (Sergey Scherbinenko, Sergey Shkiopu and Iliya Biryukov) won the second prize. The third prize was awarded to the team from Grozny State Petroleum Technological University (Ramzan Tsatsayev, Salakh Biltuyev, Said-Magomed Timayev).
The winner was determined through individual voting of Stroyproekt leading specialists and the top managers. They highly appreciated the conceptual and technical originality of the winning project “The Bridge in Heavens”, which blends ideally with the architectural appearance of the landscape and facilitates solving transport problems and development of the adjacent areas. The expert jury included Russian and international specialists in the field of design and architecture and manufacturers of innovative structural materials: Sergey Zyuzya, General Director of “Sika Russia”, Vadim Belayev, Head of Transport Infrastructure and industrial coatings department of “Sika Russia”, Andrey Gorynov, Chief Architect of Stroyproekt, Maria Malitskaya, Editor in Chief  of Internet portal ARCHITIME.RU and co-organizer of  ARCHITIME design group bureau, Boris Bernasconi, architect and founder of  BERNASKONI architecture and engineering bureau, Manuel Núñez Yanowsky, famous Spanish architect and urban designer, and  Gennady Sirota, First Vice-President of the Union of Moscow Architects.
According to the Jury Chairman Sergey Zyuzya, “Competition among the projects was so strong that the Jury was faced with a challenge of choosing the winners. The teams which managed to present both original and feasible projects and to defend them in front of the Jury became the winners”. He also added, “We have set a task to ourselves to encourage the future specialists to generate original ideas based on innovative technical solutions. And I am confident that we have succeeded”.
It is for the first time that the contest was held in Russia with more than 200 applications and participation of 54 higher educational institutions from 48 Russian cities.