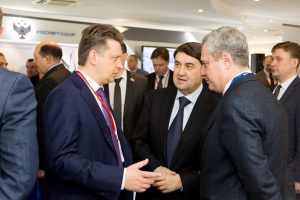 The business program prepared by Federal Road Agency brought together leading Russian and foreign road experts and representatives of major companies in the field of road construction, leasing and petrochemical industries.
M. Sokolov, Russian Minister of Transport, pointed out in his speech that the Government pays special attention to the road sector development. “Despite the difficult economic environment, transport infrastructure development remains one of our essential tasks”, stressed Mr. Sokolov. “To ensure sustainable development, we should further promote PPP mechanisms in the industry and attract more investments”.
The Conference was also attended by Advisor of the Russian President Igor Levitin,  Deputy Minister of the Russian Ministry of Transport Oleg Belozerov,  Rosavtodor Director Roman Starovoit, Chairman of the State Duma Committee for Land Relations and Construction Alexey Russkikh,  Deputy Chairman of the Federation Council Committee for Economic Policy Oleg Eremeev,  Deputy Chairman for State Duma Committee for Transport  Sergey Ten and representatives of various road associations and companies.
The main focus of this year’s Conference was outlook for the road sector development in a situation of economic instability, providing for doubling volumes of construction and ensuring roads compliance with the existing standards as well as implementation of PPP projects.
Among the Rosavtodor priorities for 2015-2017 Mr. Starovoit mentioned securing 100% funding for road repairs and maintenance as well as the projects to be implemented  in preparation for the 2018 Football World Championship.

(Based on materials from the web-site of the Russian Ministry of Transport. The central photo by Alexey Troshkin)