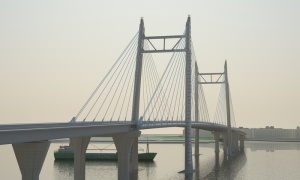 The Western High Speed Diameter (WHSD) Project implemented on the basis of PPP has been acknowledged the best infrastructure project of 2014.
The project is being implemented by the Northern Capital Highway consortium which main shareholders are the VTB Group and Gasprombank. VTB Capital is a co-investor, lender and a financial consultant of the Project. Institute Stroyproekt is a General Designer.

The WHSD is one of the most strategic projects for St. Petersburg which determines the city development as a major international transport centre and allows resolving transport and logistics problems of the North West Region of Russia.
Construction of the WHSD Central Section started in 2013 and is planned to be completed in 2016.