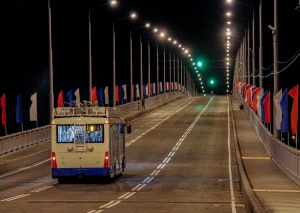 On 29 August 2014 an opening ceremony of Saratov-Engels Bridge over the Volga River took place.
A video about the bridge construction, operation and capital repair had been prepared and was demonstrated during the ceremony. Over twenty thousand Saratov and Engels residents took part in the ceremony. Valery Radaev, Saratov Region Governor, announced Saratov-Engels Bridge being open for traffic. After public officials made their speeches, the workers who performed rehabilitation were awarded. A column of bikers were the first to cross the bridge, the region officials and special guests invited for the ceremony followed them on a bus. Traffic startup was accompanied with gorgeous fireworks. The rehabilitation works started back in April and were scheduled to be completed by 01 November 2014. The works were carried out day-and-night and ahead of the schedule. It enabled the bridge opening for traffic by the beginning of a new school year.
The bridge rehabilitation was executed based on the design developed by Institute Proektmostoreconstructsia (member of Engineering Group Stroyproekt) which also performed the Designer’s Supervision.