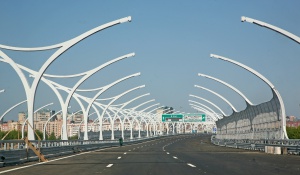 On 15 May 2014, a zone fare system was introduced at the Northern and Southern Sections of Western High Speed Diameter. The fare depends on the number of zones driven by the road user. The driver can pay in cash or by card at the toll plazas or using transponders or touch-free smart cards.

The Southern Section of the WHSD, which is the first toll city road in Russia, was commissioned in October 2012. The WHSD Northern Section was opened for traffic in August 2013.