Business meeting attended by the President of the Republic of Sakha (Yakutia), representatives of Federal Road Agency and Transport Concessions (Sakha) Consortium held to discuss planned construction of the Lena River Bridge. 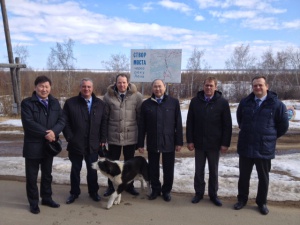 The Director of USK Most Igor Tyunin promised to build the bridge “with high quality and in short time”. ‘We will do our best to complete the Project rapidly and with high quality’, said Igor Tyunin. He stated that USK Most has vast experience and was involved in construction of the bridge across the East Bosphorus Strait in Vladivostok.

Alexey Zhurbin, the General Director of Institute Stroyproekt, said that nowadays state-of-art construction technologies allow meeting any challenges. He also noted that 12 months were given for the bridge design and State Expert Review would take 3 more months: “I hope we will manage to complete the design in about a year, since the contractors are willing to start the construction as soon as possible”.

Mr. Zhurbin also told that about a dozen of the bridge options were worked out together with St. Petersburg Hydrological Institute while preparing for the tender. A special hydrologic model was developed to allow detailed analysis of the selected option, including ice loads.

‘We will prevent any failures, so all citizens of Yakutsk and Yakutia can be reassured. The Project will be absolutely safe. Of course, any construction to some extent influences the environment but we will minimize the impact as much as possible’, emphasized Mr. Zhurbin.

For reference: On 01.04.2014 Transport Concessions (Sakha) Consortium was announced a successful tenderer of an open concession tender for construction of a road bridge over the Lena River. The consortium is headed by Transport Concessions (Sakha) LLC and includes also VTB Bank JSC, USK Most JSC, Bamstroymekhanizatsia JSC and Institute Stroyproekt JSC. The Client is Federal Road Agency Rosavtodor.