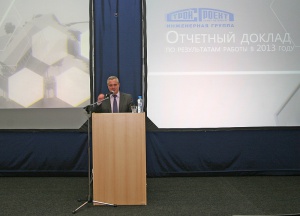 Engineering Group Stroyproekt remains a leading company rendering design and construction control services in transport construction sector. The past year turned to be quite eventful for our company.

Rehabilitation of Dvortsovy Bridge was finalised. The bridge rehabilitation design won the Design of the Year nomination in Russian Road 2013 Competition.

Last June a Memorandum of Engineering Group Stroyproekt which determines basic performance principles of the group was signed in Veliky Novgorod.

The Chief Engineer Division has been constantly improving the efficiency of engineering work. Stroyproekt has been developing and introducing unified standards of design and design process management, advanced training and IT.

Engineering Group Stroyproekt has been growing both in geographical and quantitative terms. Early 2014, a subsidiary company Tunnelstroyproekt was set up in Sochi.  A representative office was established in Novosibirsk and the branch of Institute Stroyproekt was opened in Astana, the capital of Kazakhstan. The total number of the company’s staff has reached 1150 employees.

Last year a scientific innovation centre was set up within the Group. Nowadays Stroyproekt is actively involved into various research and development projects. The portfolio of these services has significantly expanded and Stroyproekt has proved its image of an advanced and innovative company.

The company’s main trend of 2014 will be expansion of the project geography. The company will be working in St. Petersburg and Leningrad Region, Moscow Region and Krasnodar Territory, Novgorod and Tver Regions, Novosibirsk and Tyumen, Saratov and Samara Regions, Krasnoyarsk, Voronezh Region, the Chuvash Republic, the Republic of Mordovia and the Republic of Adygea, Khabarovsk and Orenburg, Penza and Ulyanovsk Regions, Yakutsk, Stavropol Territory and Ryazan, Nizhny Novgorod and Rostov Regions and, finally, Turkmenistan and Kazakhstan.

The geography of our projects has been broadening.  Our slogan of 2014 is Geography. Mobility. New Opportunities.