New name for the bridge across the Ob River in Novosibirsk 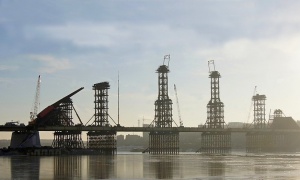 On 03 December 2013 the city designation commission of Novosibirsk decided on the name for the new bridge across the Ob River which is now under construction. The bridge name will be Bugrinsky Bridge.
Earlier a competition “Name the bridge” was held among the citizens of Novosibirsk who suggested about 900 names and only five of them were selected by the commission for consideration. Eventually Bugrinsky Bridge was chosen as this name associates with the name of the nearby park on the left bank of the Ob River.
Previously, the bridge used to be called just «the third Ob River Bridge”.