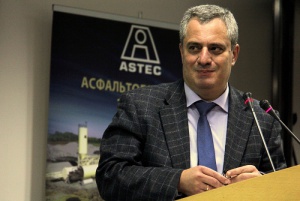 Alexey Zhurbin, General Director of Stroyproekt, and Oleg Kaschenko, Head of Marketing Department, have presented their reports at the Conference.

On 21-22 November 2013 the 6th Conference “Application of Innovation Methods and Materials in the Road Sector” was held in St. Petersburg. It was organized by St. Petersburg Association “Alliance of Road Sector Builders and Suppliers” (ASDOR).

The event was attended by representatives of the Russian Ministry of Transport, the State Company AVTODOR, the Federal Road Agency, directors of leading Russian road companies and their counterparts from other countries.

The report highlighted the fact that in May 2012 the Russian President gave instructions to facilitate implementation of state-of-the-art management and engineering technologies, including international ones, in the Russian market.

To that effect, in 2013, four Government Decrees and one Federal Law were drafted and adopted with an active support of the Ministry of Transport (Mintrans), Rosavtodor and road sector community.  These new documents have introduced certain improvements to the state expertise examination procedures, Urban Development and Land Codes as well as to the construction legislation.

According to Mr. Zhurbin, the achieved results deserve high appreciation. Yet, there are some outstanding problems related to expertise and tender procedures in design and construction sectors that result in a lower quality and a price dumping as well as in the fact that Clients do not comply with the Urban Development Law   or shift their responsibilities to Contractors. Besides, an overcontrol and distrust to self-regulating bodies on the part of the state authorities is still present, although the self-regulating system has been introduced into the business practices by the state itself.

The General Director of Stroyproekt believes that initiatives not included yet into the regulations shall be realised. Therefore, a package of law making proposals for 2014 shall be developed   jointly with Mintrans to solve long-standing problems.

However, there are some recent tendencies. For example, last year on behalf of Rosavtodor the members of non-commercial association RODOS have undertaken development of 12 design and research standards for the Custom Union States. Rosavtodor is ready to finance the industry science investigations provided their results are of maximum use in practice, in particular for improvement of the current regulations.

Oleg Kaschenko, Head of Marketing Department Stroyproekt and Chairman of RODOS board, made a presentation of the study carried out in 2013 at the request of the Ministry of Transport and Rosavtodor. The study analyses how the Russian Law should be amended to facilitate a wide and common use of FIDIC proforma contracts.

The main conclusions of the study are as follows:

Neither the Russian Law nor the Civil Code prevents using FIDIC Contracts. Moreover, in Russia, in 2001 – 2008 several major projects financed with the EBRD loans were completed. All the above projects were implemented based on FIDIC contracts with involvement of independent Engineers.

So, if the Russian legislation does not prohibit application of FIDIC proforma contracts, then what actually prevents their introduction?

These notions cover a quite independent business. A Consulting Engineer means not only a Designer but also a broader expert who combines understanding of economic factors with knowledge of design and construction methods and who can assist the investor to evaluate the investment feasibility for a particular project as well as to determine risks, time and costs. During the project  implementation, the role of the Consultant increases and he might turn into a designer, construction supervisor or an acceptance commission member.

Using the consultant’s services is very common in many countries. Not only bank investors but also State Clients use their services and the range of their customers is very broad.

In Russia, on the other hand, this business is only starting. In Russia we have design, survey, expertise or architectural services. All of them are independent professional services. However, Consultant Engineers that render all the above services as a whole do not practically exist.

The completed analysis proves that there is a direct relation between the engineering development level and the economic level of the respective country.  The higher the status of the Engineer, including its powers and decision-making freedom, the higher is construction   quality and efficiency of all stakeholders’ interaction.

Russia has an enormous potential for development of construction engineering services. The problem is with the Russian legislation which has mostly preserved outdated Soviet regulations for construction sector. On one hand, there are new market   regulation tools and on the other hand, old centralised economy rules. This situation is explicitly reflected in the Urban Development Code which mentions the Client and the Contractor only, but does not provide for the role of the Consultant Engineer.

Many countries have faced similar problems. For example, former Warsaw Treaty states (Poland, Hungary, Romania, the Czech Republic, former Yugoslavian republics) and the Baltic States. All of them had to make a choice between the old construction management system and more advanced experience of developed countries.

Based on the analysis, an unambiguous conclusion can be made that Russia needs a quick and resolute move to the FIDIC practices and Engineering Consulting.

To speed up this process, a road map is proposed in the form of a Government Decree on establishing and development of Engineering Consulting in Russia. This road map complies with the economic strategy of the Russian Government aimed at harmonisation of the Russian Law and international standards.

The developers of the proposed Road Map are confident that it will be approved by the Ministry of Transport of Russia and will obtain the status of the Russian Government Decree.