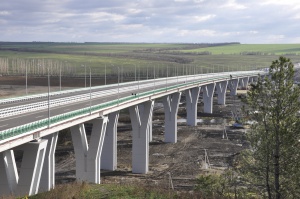 On 15 November 2013, the reconstructed 15-km section of M-4 Don motorway (877 km –892 km) was open in Rostov Region. As part of the project, a four-lane by-pass road of Tarasovsky town has been constructed.

The opening ceremony was attended by Mr. M. Sokolov, Minister of Transport of the Russian Federation, Mr. I. Levitin, Aide to the President of the Russian Federation, Mr. V. Golubev, Governor of Rostov Region, Mr. S. Kelbach, Chairman of GK Avtodor, Mr. V. Petrov, Director of JSC Institute Stroyproekt Rostov branch and other officials. The project was initiated by the Governor of Rostov Region at the end of 2011; construction works started in April 2012.  The section between 892 and 907 km is still being built; the entire project is planned to be completed in early 2014.

At the opening ceremony Mr. Sokolov stated that before reconstruction the above section of the federal highway used to be a headache for drivers and now it is an aesthetic modern highway which meets up-to-date international standards.

We congratulate all employees of our head office and Rostov branch who contributed to the project!